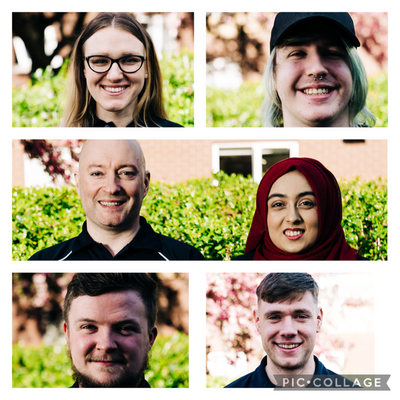 A video games specialist, an engineer and a plumber are among the five young Scots taking on the world in the ‘Skills Olympics’.

The five are competing in the WorldSkills Competition 2022 Special Edition in South Korea, France, Germany and Switzerland.

Former New College Lanarkshire students Mona Nawaz and Lewis Batchelor along with George Hutchison and Simi Federova, who studied at City of Glasgow College, and ex-Moray College student Connor Cruden will represent Team UK in the event having already triumphed in the national finals.

George, 21, from Ceres in Fife has made the longest journey this week when he flew to Goyang, South Korea to demonstrate his talents in 3D Game Art category while Mona , 23, from Motherwell and Lewis, 23, from East Kilbride will have a trip to Bordeaux next week to showcase their skills in Digital Construction and Mechanical Engineering CAD respectively.

Simi, 23, originally from Slovakia but now based in Glasgow is competing in the Restaurant Skills category in Lucerne, Switzerland while Conor, 22, from Huntly in Aberdeenshire, is in Lahr, Germany for the Plumbing and Heating event.

More than 1000 competitors are currently battling it out in 61 finals 15 countries during the WorldSkills event.

Representatives from all four UK nations are vying with peers from around the world to be crowned the world’s best in 29 different skills.

Mona said: “I am absolutely over the moon. I can’t wait to show everyone what I can do.”

George added: “To be rewarded for something I am so passionate about is amazing. I can’t wait to challenge myself against the rest of the world.”

Shona Struthers, chief executive of Colleges Scotland, commented: “These five young people have already demonstrated the outstanding skills they have acquired in Scottish colleges. The finals offer an incredible opportunity to showcase their talents on the global stage while competing against their peers from so many different countries. We wish them every success.”

WorldSkills UK’s Scotland Director Martin McGuire said: “We should all be proud of the skill and determination these young professionals have shown to get out there. They represent the very best in their field, but will have to be at the top of their game competing against their peers from across the globe.

“The event is a real opportunity to raise the profile and prestige of UK skills and is a life-changing opportunity for all involved.”

More details on each of the five finalists can be found below:

George Hutchinson studies at the University of West of Scotland and was at City of Glasgow College when he applied for the WorldSkills UK competition. He said: “To be rewarded for something I am so passionate about is amazing. I can’t wait to challenge myself against the rest of the world and prove all this hard work has been worthwhile. The whole experience so far has given me a huge confidence boost as a person and an artist, and it’s going to make such a difference to my career in the future.”

Mona Nawaz studied at New College Lanarkshire and now works for Balfour Beatty. She said: “I am ecstatic to have reached this level and been selected for Team UK. Representing the UK is such a brilliant opportunity and I am absolutely over the moon. I can’t wait to show everyone what I can do.”

Lewis Batchelor now works for Probe Test Solutions Ltd in Hamilton and is another former New College Lanarkshire student. He said: “To be selected for Team UK after years of hard work is a huge achievement and so rewarding. It’s proof that if you keep going and believe in yourself you can make it. It’s great to see skill and my passion rewarded and that I get the chance compete internationally. It will be very different to competing in the UK and there will be huge pressure, but I am really looking forward to it.”

Connor Cruden studied at Moray College and now works for Cowie Plumbing and Heating. He said: “It means so much to have made it through after all the hard work and training of the past few years. I have never been to Germany and am absolutely buzzing to be heading out there to try and prove myself on the world stage.”

Simi Federova is a City of Glasgow College student and originally from Slovakia. She said: “My heart was racing when I found out I had made Team UK and it still hasn’t sunk in. It has been a brilliant journey just to get this far and I am delighted it is going to continue all the way to Switzerland.”